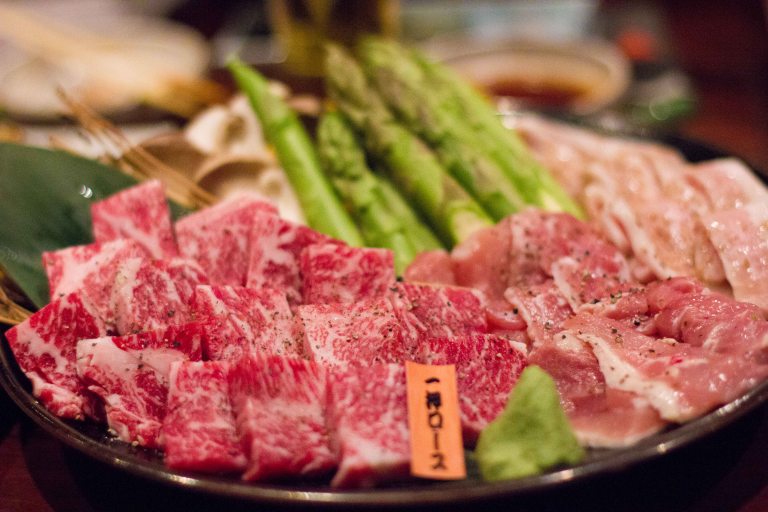 Heading back to Kyoto to start my weekend of family festivities, which was the main purpose of my visit to  Japan. As I mentioned in a previous post, my dad’s side of the family puts together a family reunion, led by my Great Uncle Arthur, every few years. In his latter years, he’s trying to emphasize the importance of family connections. It seemed fitting, that to start the weekend, I would go to visit my grandmother on the way to Kyoto as she’s gotten to the stage where she can’t make it to the reunion anymore.

After our visit, we arrived in Kyoto and my brother and I wandered to the Imperial Palace grounds to see if we could find some blooming cherry blossoms. Inside the park, we were greeted with beautiful blossoms in so many colours. I felt lucky to be witnessing Japan in one of its most beautiful seasons. 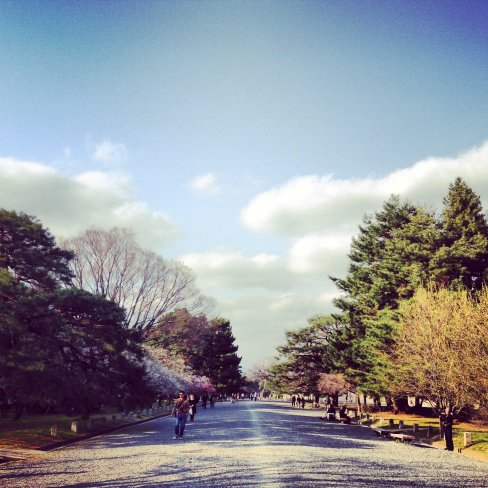 Feeling totally in love with Japan, I was giddy with excitement about our yakiniku dinner, which happens to be one of my favourite meals in Japan.

Yakiniku is most easily described as Japanese-style Korean barbecue and best eaten in a big group. Lucky for us, my great-uncle Arthur  hosted the 20 of my family members who had made the trip from Canada to Japan for  a pre-reunion dinner at Issunboushi.

I was sitting with my brother and sister, across from my second cousins from Vancouver, (that I never see while I’m at home), and at a table beside my parents, uncle and my dad’s cousins. As the food and drinks started hitting the table, I was happy that this trip to Japan was organized. Family moments like these are rare and I was grateful that it was happening and as an added bonus, the food was delicious! 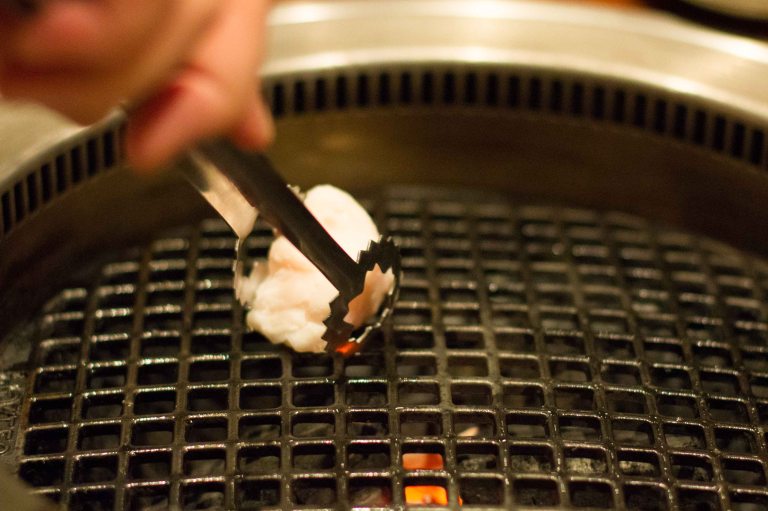 I was full from the meal, but really wanted to take my brother and sister on an adventure to a cool bar I’d read about in the back of a Buddhist temple. Lucky for me, they were up for the adventure and luckier still, my second cousin Kenzo was in as well.

Once I’d read about the Kanga-an Temple’s hidden bar, I knew I had to go have a drink there. Who wouldn’t want to have a drink amidst the zen beauty of a Buddhist temple? I had the address in hand and my brother, sister and I hopped in a cab. The taxi driver looked at us quizzically when we asked to go to the temple as he thought it was closed, but I assured him that it was okay.

In my research of the bar, it never mentioned anything about reservations. So although our arrival was met with a bit of a surprise, the Buddhist priests who run the bar were accommodating nonetheless, (or at least we realized they were being accommodating and not just shoving us into a corner).

Because the 10 seats at the bar were full, a make-shift table was created for us in the entrance way where we were served Yebisu draft beer as we waited for my cousin’s arrival. We learned that Kenzo’s cab driver originally refused to bring him to Kanga-an because he was adamant that it was closed and it took a phone call by the cab driver to the Kanga-an to convince him it was acceptable to drop him off there. Only in Japan…

My cousin Kenzo arrived and a few moments later, seats opened up in the bar area.I couldn’t help but feel zen in the moment looking out at the beautifully lit gardens.

More drinks were consumed and I think we switched to shochu at some point. It was one of those nights where everyone was funny and we laughed the whole night away. Our joviality may not have been on point in our surroundings, but the priests working the bar didn’t seem to mind. In fact, at the end of the night they let us take a wander through the back gardens to take photos. It was a fantastic ending to a great night in Kyoto!

* Thanks for letting me use your photos, Vince!