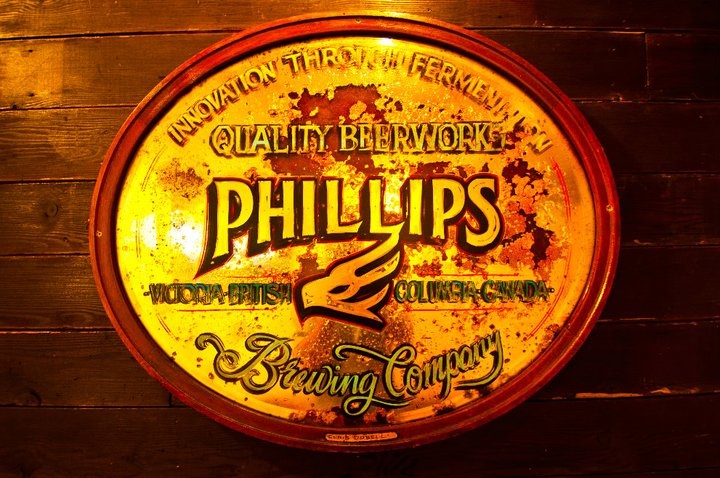 My brother and I were invited to paddle with Riptide this past weekend for the Victoria Dragon Boat Festival.  It was a great excuse to go over to the Island for a visit with Mark, Megan & co. and to search out new and exciting tastes.

On our way to the ferry, we stopped at Au Petit Cafe because a Bánh mì is so much better than ferry food.

Arriving in Victoria on a hot summer’s day, we made a quick stop for at Italian Imports for another meatball sandwich, (equally delicious although totally different).

To make the most of the beautiful day, we stopped for a Friday afternoon pint.  I chose Swans Brewpub because I like their beer and their pseudo patio.

Funny thing though, in my mind I thought Swans was Phillips and so while I went expecting to have some Phillip’s beer, it didn’t quite turn out that way.  Lucky for me, Phillips Brewery just down the road and although they don’t have a Brewpub, they did have a tap-room open for samples.

While no one can top the eating experiences I’ve had on race days with Team LifeScan, Riptide is a food focused team as well.  So much so, that as we were lining up for our morning race, we started talking about Red Fish Blue Fish and decided that “fish tacos” would be our motivation to race well.

The team was also 1st in line at RFBF at 11am, for their 11:30 opening. Good thing, because they ran out of the coveted scallop tacones right after the team went through the line. 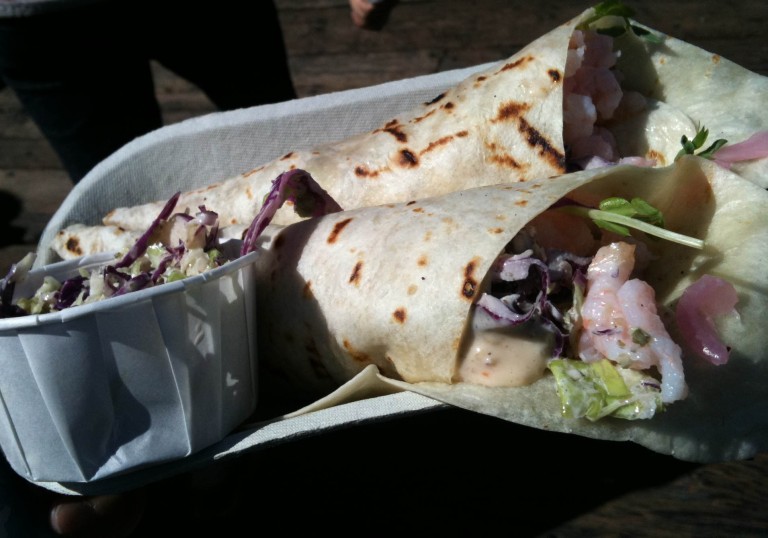 Wanting to take advantage of the lovely summer’s evening, a dinner of sausages thrown on the bbq was our plan.  A quick stop at the charcuterie place in Oak Bay that Mark had been raving about and we were set for the night.

Another day of paddling on Sunday and another lunch adventure ahead.  Riptide paddled so well on Saturday, that we ended up having a later morning start time on Sunday, (the better you do, the later you get to sleep in).  Unfortunately because of the late start, it meant that we couldn’t get into the Red Fish Blue Fish line-up earlier.  That didn’t stop the team though…

Instead, I chose another restaurant that I’ve had my eye on the last few times in Victoria.

My thoughts on Foo?  It’s no RFBF, but it wasn’t horrible.  Maybe I’m being hard on it because I really just wanted to shovel some sustenance into my body and both dishes were a bit on the sweet and had too much sauce to carb ratio, (which to some wouldn’t be a bad thing).  Maybe I should have just been patient and waited in line again at Red Fish Blue Fish.

All in all though, I can’t complain.  The weekend held some fabulous food and drink memories coupled with some great racing with new friends and an overall 7th place finish in the festival.  What more can a girl ask for?

* Thanks again to my brother Vince for letting me use some of his awesome photographs.  Hoping he gets back into his photo project soon, which you can check out at vbando.wordpress.com

2 Replies to “36 hours of Tasting Victoria”

Missing nights like this…
As 2021 comes to an end, I’m grateful for the travel that allowed me to be dazzled by delicious food&drink and delight in laughter with good friends in places I know so well, but had to just dream of for so long. But above all, travel in the latter half of this year allowed me to put this pandemic into perspective. I understand what I thought before was “safe” will never be again, but I move forward with better trust of my instincts outside of the noise. Travel has always made me happy but this last year it gave me peace and clarity as well. With this, I know 2022 will be better.
My best days in Oaxaca look like this. Thank you @oaxacking for always sharing amazing with me and to @chuchopotts for the 📸
I dreamt of this lechon with chicharrón tostada (sin salsa) for 2 years… And it was more delicious than I remembered (x2)
Take me back
Craving this chile relleno taco from @carmentacosdel right now. Went back twice to have another and they were sold out each time. The chorizo taco and mushroom and squash blossom quesadillas are amazing too, but it’s the chile relleno taco I can’t stop thinking about. Marking it on my list as a pre-noon snack for next time I’m in Oaxaca.