After a couple of very crazy weeks of work I was in need of an adventure to blow off some steam. A weekend in Seattle? Yes please!

Friday 1:30pm – Leaving home later than I’d like and I’m in a bad mood because I know we’re going to hit traffic.

2:20pm – Peace Arch border line up. Thinking the NEXUS pass has become just a money grab as the line up for Nexus is so much longer than the regular one. Should have just gone through the regular line with its 15 minute wait instead….

3:45pm – Hungry, but many miles from my destination, I needed a road snack. With limited options, I stopped at the Golden Arches. I’m now hard-wired to feel shame when I eat at McDonald’s, but was shamefully satisfied with my chicken nugget Happy Meal. Ridiculous I know, but probably better than constantly craving those salty fries I love so much.

4:40pm – Hit the Seattle rush hour just south of Everett. Ugh, traffic was ugly and the thunder showers rolled in. The rain came down in sheets which dampened my mood more.

6:10pm – Checked-in at the beautiful Hotel Monaco. I was happy to book another Kimpton hotel after my awesome stay at the Firesky Resort in PHX. Too bad I was 10 minutes too late to enjoy the complimentary wine hour. The upgraded room I received more than made up for any bad feelings I had thus far on our roadie.

8:00pm – Over the years, with frequent visits to Seattle, I’ve been able to stay on top of the dining scene. I’ve gone from eating Downtown to Belltown, to Capitol Hill and then further out to Madison Park & Queen Anne. Now the dining scene seems to have moved to Ballard, which is 15 minutes north of downtown by car and the “strip” in Ballard has character. Last year I thoroughly enjoyed the Walrus and Carpenter and although I wanted to try La Carta de Oaxaca, I didn’t want to risk the wait on a Friday night. I’ve been a big fan of Ethan Stowell’s other restaurants (How to Cook a Wolf, Anchovies&Olives and Tavolata) and I’ve heard Staple and Fancy is where Stowell was spending time in the kitchen.

True to rumour, I saw Ethan Stowell wandering around the very busy dining room.  I was very curious though as the place was packed with a line-up out the door but there was a table for 8 that was being held long enough to be considered a “no show” in my books.

So many delicious looking things on the menu, so hard to choose. The story of my life…

As I was oooohing and ahhhhhing over our starters, a large group entered the room and filled the empty table next to us. I immediately spotted chef Hugh Acheson, from Top Chef/Masters. I knew Top Chef was filming its current season in Seattle so I wasn’t shocked to see Acheson at the restaurant. I was shocked that he was so much younger and better looking he was in person, (I think he’s met with some tweezers lately as his patented mono-brow wasn’t as distinct). I was a bit giddy over the fact that we were dining next to this Top Chef until I was reminded that only a few months ago I was dining next to THE TOP CHEF. That put things back into perspective for me to bring my attention back to the food.

Ethan Stowell did not disappoint. The beets were delicious, pastas were fantastic and Staple&Fancy becomes part of my highly recommended list.

SATURDAY 10:30am – A wonderful morning sleeping in and I was in the car to visit the U-District Saturday morning Farmer’s Market.  I ran into a problem when the directions led me to an empty gravel field.  My moment of sadness quickly turned into anticipation for awesomeness. Awesomeness for fresh udon.

Billed as “Sanuki-style udon”, anyone who’s watched the movie Udon, (and then made a trek to Sanuki in Japan on an udon pilgrimage) would understand my eagerness for this experience.

In my excitement I ordered incorrectly.  What I wanted was udon in sauce not soup, but it was lost on me in the English translation.

6:00pm – The main reason for this Seattle roadie was to see Yu Darvish throw against the Mariners.  Even more exciting was the match-up was against King Felix Hernandez.

But alas, this is a food blog so I’ll get back to the food. After the poor showing of food at Chase Field in Phoenix, I was happy to be back at my “home field” where the eating is good.

I had a great time at the game, watching King Felix take command of the mound and pitch a full game for a M’s win.

10:00pm – I haven’t done a lot of late night dining in SEA, but Ba Bar looked interesting and I hoped that there would be some good people watching.  The food was good, especially the Imperial rolls.

I was a bit disappointed that although the space was very conducive to a great night out, there weren’t many others there to share the experience with.  Maybe I just went on an off night. 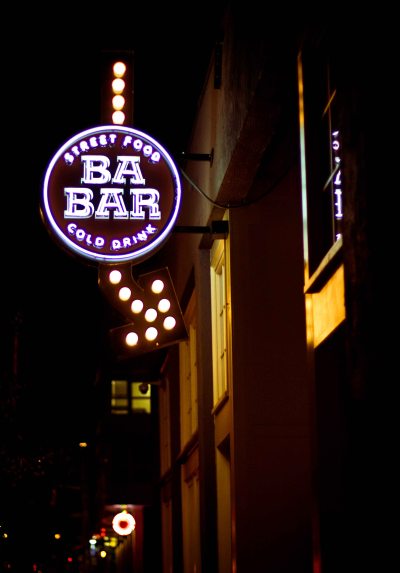 Sunday 10:00am – It’s difficult to spend a weekend in Seattle and not go to Pike Place market but seeing as it’s the height of tourist season I was okay to forego the market for CHICKEN AND WAFFLES.  I’m a sucker for chicken and waffles and had a decent version at Skillet Diner last year.  I posted a photo of that plate and a friend immediately recommended Local 360, saying it had the best he’s ever tried.  So of course I had to go.

Celebrating 10 years of incredible dining as Call Me A Food Lover. My Top 9 Peak Experience Meals linked in my bio 🍴 1. The French Laundry - Yountville, Ca 2. 41° - Barcelona 3. Kikunoi - Kyoto 4. Alinea - Chicago 5. Empellón - New York 6. Willows Inn - Lummi Island 7. Single Thread - Healdsburg, Ca 8. Pujol - Mexico City 9. Origen - Oaxaca
Even though I lost all my photos of 2019, I’m able to perfectly sum up my happiness of the year in this photo. Thankful for all the amazing adventures I experienced this past year. Grateful for the friends who shared their time, knowledge and homes with me. 📸@notprosocial
Mother Nature putting on an early morning spectacle to remind me that the crazy frenzy of the holiday season is just a small blip in the big picture.
Comfort and joy 🎄☕️🎄
The home I crave the most when I’m away involves warm bubbling Asian flavors shared with favorites.
When life knocks you down (and steals the cell phone out of your hands) of course you have to go for gelato! My 4 week vacation has come to an end and I’m leaving with a mind full of amazing memories but no photos of my time away (reminder to self to check my backup settings regularly). I always feel like Alice in Wonderland when I’m in Mexico, experiencing and tasting the best of the best. But the time has come for me to come out of the rabbit hole and fly back north. I am thankful to everyone who shared amazing experiences and tastes with me, and even more grateful to those who were only 1 text away the past few days when I needed the support. I spent 45 days in Mexico in 2019 and I’m leaving feeling like it still wasn’t enough time 😊