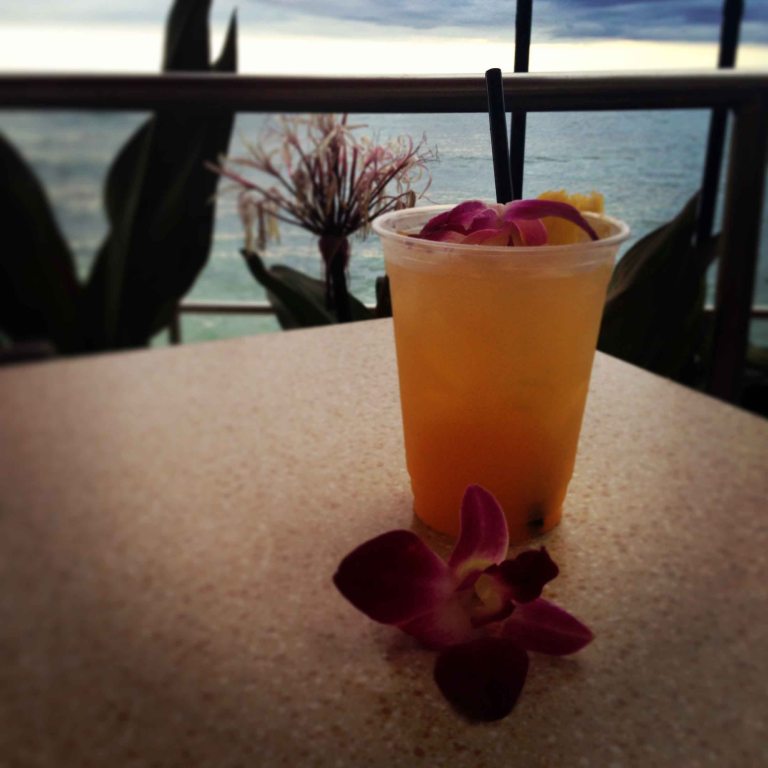 I’m throwing my hands up in the air. I will never catch up to post on all the places I’ve visited in Miami/Chicago/LA/Honolulu and not yet written about. I do believe I have 1 in the hopper for an amazing coffee experience I had in Oaxaca, but other than that, I can’t keep feeling the stress of pending posts. The difficulty I’ve had with this decision is that I ate at some good places in these places, too good to be forgotten. But I woke last night in the middle of the night with a plan. I will post “snapshots”, photos of the places I’ve visited minus the in-depth stories. It’s not my ideal, because I believe that the thing I enjoy the most about Call Me a Food Lover is sharing the story, but I’m a quarter of the way through year and it’s time to stop looking behind me and start concentrating on what’s ahead.

I had 5 days in Honolulu and posted on 1, but there were some highlights of the remainder of my time on Oahu that I wanted to share.

The Pig and Lady:  I’d read a lot about this food truck turned into a cool restaurant. From all that I read, the Pho French Dip Banh Mi and Pho Tsukemen were the reasons  to make a visit to Chinatown. As The Pig and Lady only serves French Dip at lunch, that’s when I visited. My verdict? The French Dip was delicious, but I was left wanting a bit more from the tsukemen. 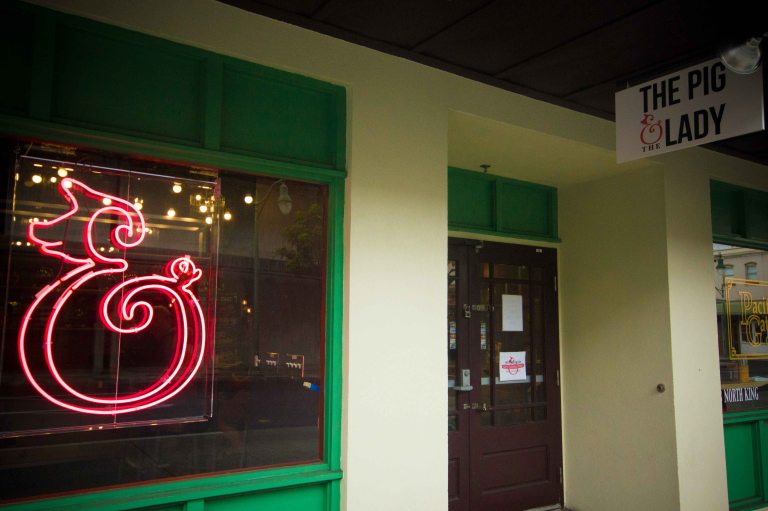 La Mariana Sailing Club: I’d seen the Original Tiki Bar on an episode of Bourdain’s “No Reservations” and had it on my list to go for a drink. I never thought I’d end up eating there for dinner but a few drinks in, enjoying the live entertainment and their bar food seemed like it would fit the bill. This place is definitely about their delicious Mai Tai’s but a bad (for you) plate of nachos and fried appies sure helped to sop up the copious amounts of liquor I consumed that evening. 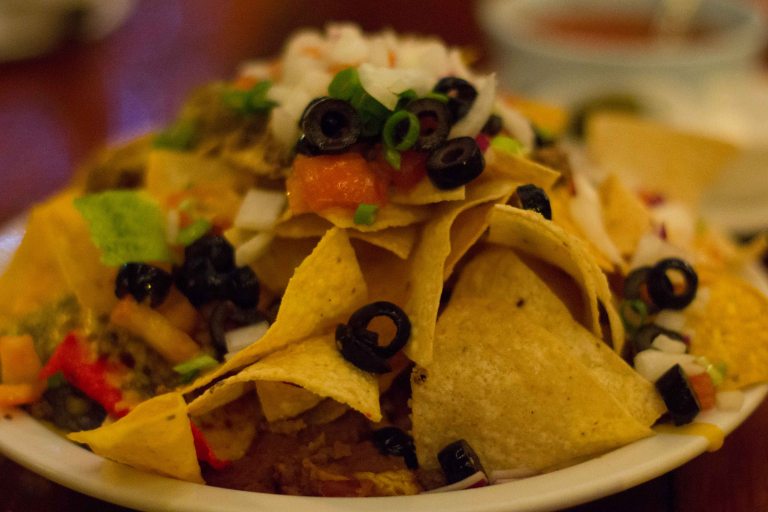 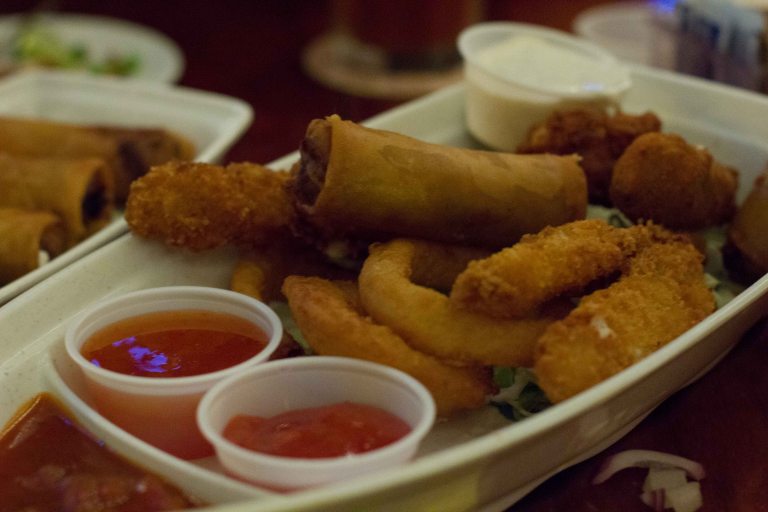 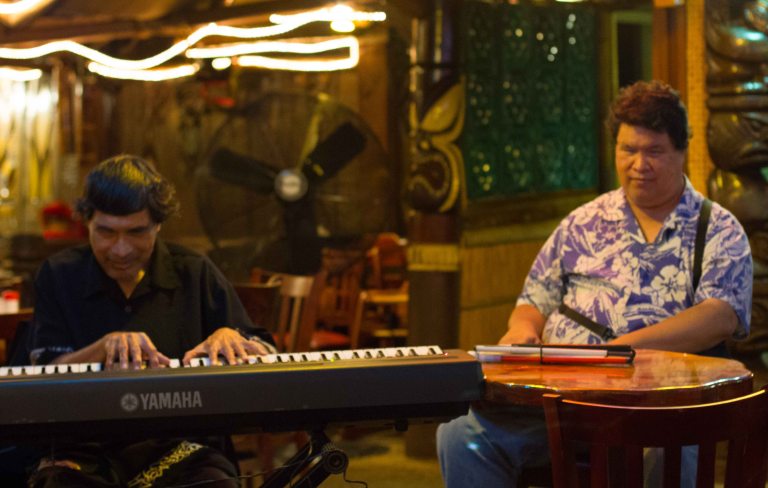 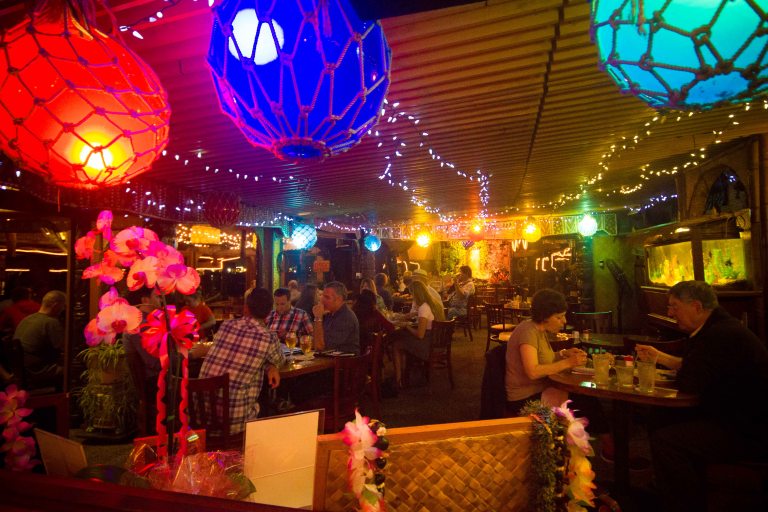 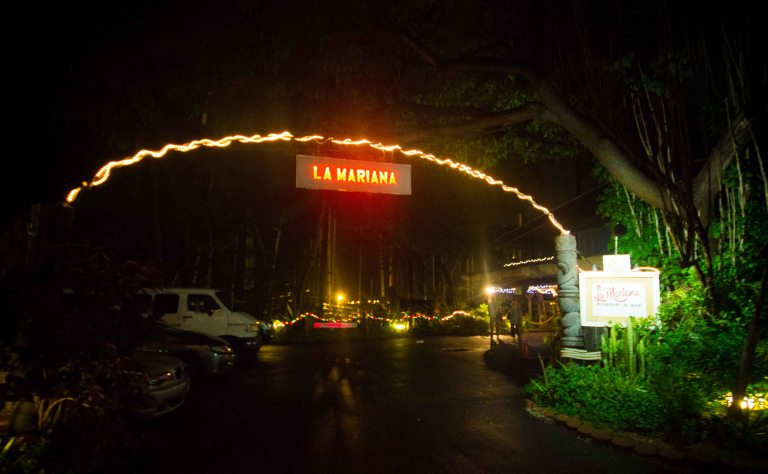 I woke up each morning to look for sunrise and on a few mornings, I saw some glimpses of colourfulness that reminded me of the beauty of Honolulu. 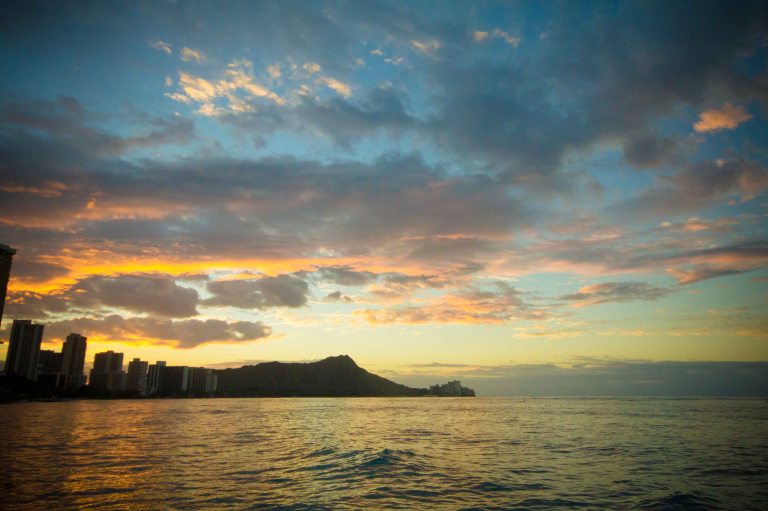 Mana Bu’s: This is my hands down favourite place to visit when I’m in Honolulu. It’s a very simple store that sells 1 thing… Onigiri. Rice balls. You may know them as musubi, but in my family they’re’ known as onigiri, so that’s how I’ll refer to them here.

I’m always astounded at how good the onigiri at Mana Bu’s are. You probably will look at the photo and think, “how good can a ball of rice be”? But take it from someone who’s eaten a lot of onigiri in my life and even more rice. These are very good. The rice is great quality and the fillings are delicious. 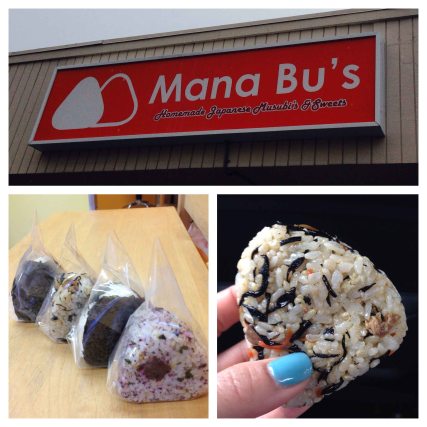 Hank’s Haute Dogs: Another repeat, but worthy of a return visit. I will forever remember this meal as the one where after 4 years of hard use, my camera finally broke. Lucky for me, my trusty iPhone is always ready to be the stand-in. 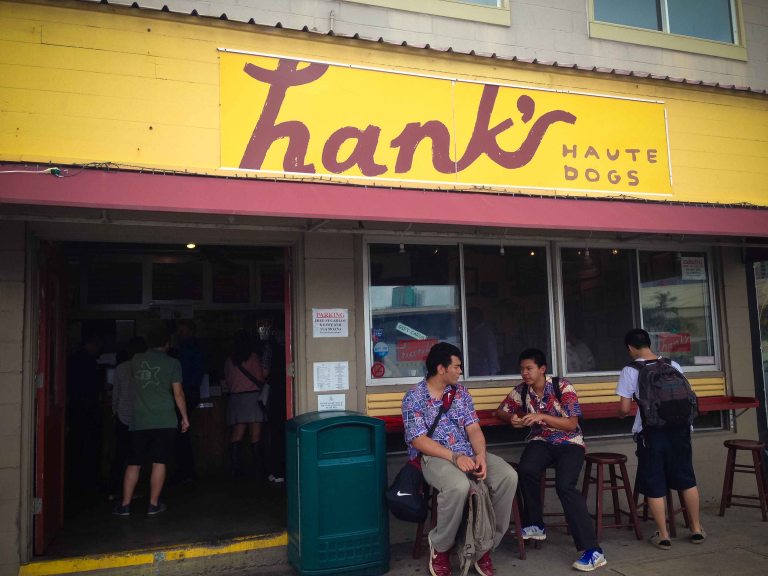 In previous posts, I’ve complained about how much it rained on my trip. I’m not taking back my statements, but looking back at the photos, I see that I saw more than my share of amazing sunsets. 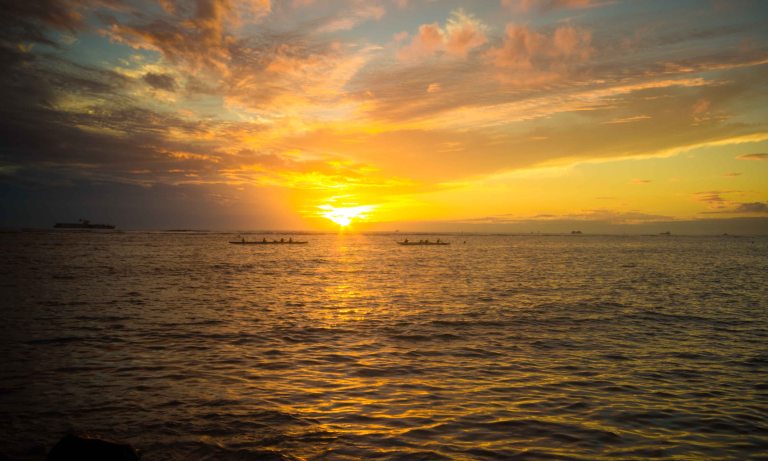 Rainbow Drive-In: A Honolulu institution known as one of “President Obama’s favorites”, this time I had to check it out. I ended up at Rainbow Drive-In not once, but twice on my trip, not because I thought it was that amazing, but more out of convenience.

After having an amazing loco moco at Aloha Mixed Plate in Lahaina, and a few bad ones after that, I was really craving an excellent loco moco. But Rainbow had just sold out of fried rice the order before mine, so I was left with plain white (I have come to believe that although not traditional, it’s the fried rice that makes a loco moco for me). I wouldn’t come back for the loco moco, or the savory glassy long noodles that Chef Roy Choi had recommended in an article I’d read. But Rainbow Drive-In is an institution, so I understand if you must go and if you do, I think the winner here is the Barbeque (teriyaki) beef. Order a plate of bbq beef, with a side of bbq pork minus the rice and macaroni. 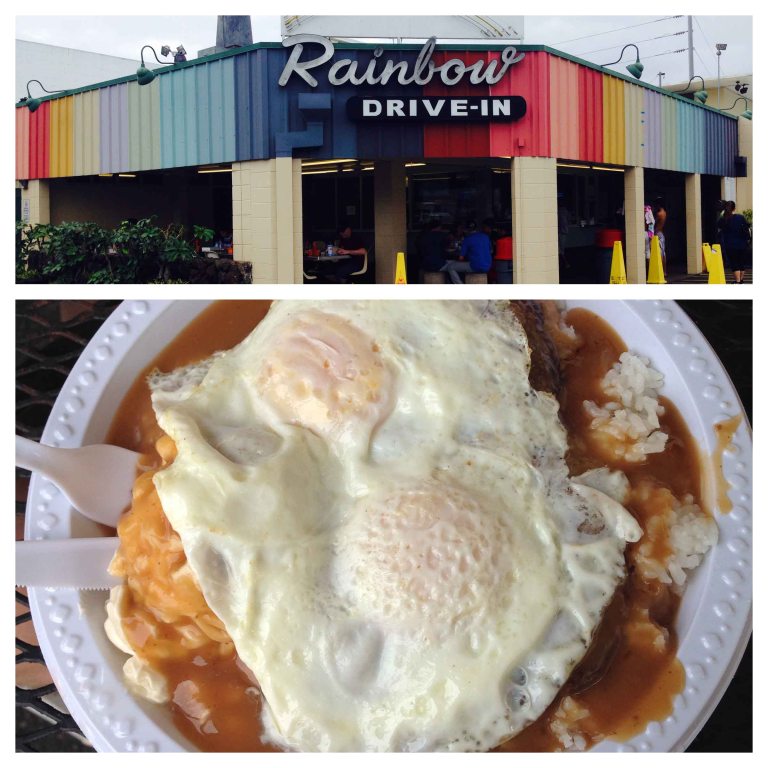 Ono Seafood: I didn’t get the opportunity to eat much poke while on Oahu, but had a craving the day before I left. Ono Seafood is located a bit hidden from the street underneath a run-down apartment building. It would be easy to miss, but trusty Googlemaps guided me to the door. The poke here is delicious and the ingredients tasted super fresh. I would have to say of all the poke I had in Hawaii, this was my favourite.

Taormina: One of the best dinners I had in Honolulu came as a bit of a surprise to me. Selfishly I had chosen Taormina only because I’d read that their uni pasta was decadent, delicious. In my mind, the bar was set high to come close to the best uni pasta I’ve ever had, but I was hoping this would come close with the same high price tag.

I’m saying the quality of the meal came as a surprise because Taormina is located in the heart of the tourist area of Waikiki, where I’ve come to expect “all American” quality and experience, catering to tourists. Taormina is a romantic restaurant with great service and the food was amazing. The uni pasta was delicious, as was the classic Bolognese, but the stunner was the balsamic laced Sicilian Bolognese “Moderna”. The meal was so special that we asked to see the chef at the end of the meal to thank him and to get a glimpse of the chef who was behind our fantastic meal. We learned that  Chef Hiroyuki Mimura trained in an Italian restaurant in Japan and later moved to Italy where he worked refined his techniques and talent. The food at Taormina is reflective of the experiences of the Chef and diners are rewarded with a wonderful meal.

My one and only trip to the beach while I was in Honolulu, happened to be on my last day in Hawaii. I definitely made the most of lying in the sun and enjoying a great Hawaiian beach treat.

That in a nutshell are the snapshots of my dining in Honolulu for 5 days. All that’s left is one last sunset drink to celebrate Hawaii. 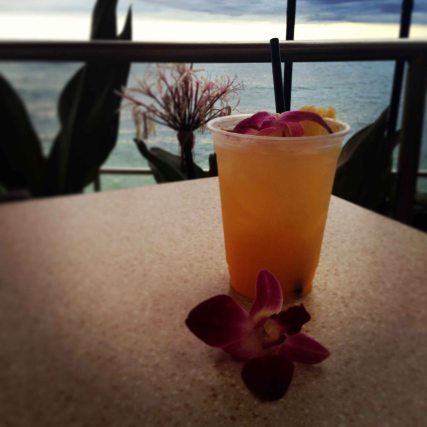 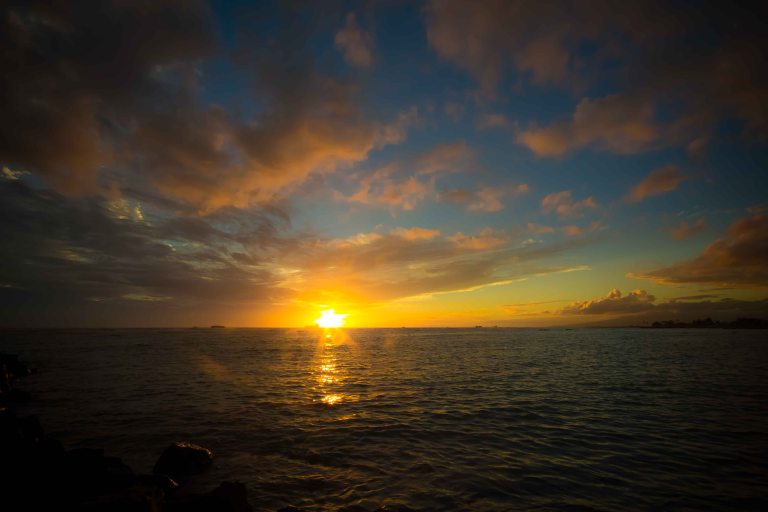 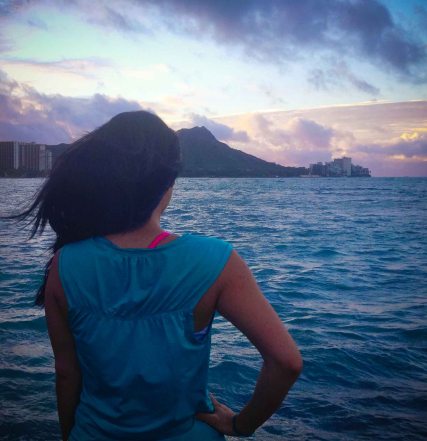