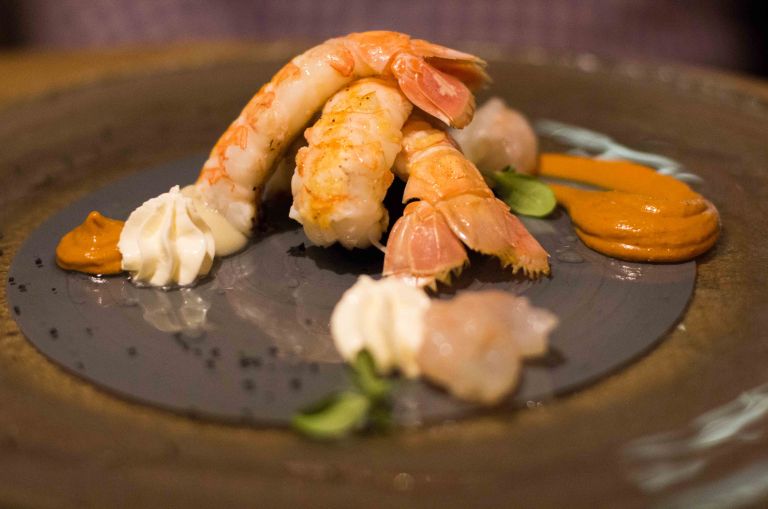 Normally when I go away, I scour over fine dining options, to choose my “1 high end meal” of the trip. I start with the World’s Best 50 and Michelin lists, and I start whittling my list down through careful research until I finally choose. But my trip to Rome was different. My goal was to fill my food memory bank with classic Roman flavours that my palate could recall at home in my kitchen.

So while Michelin stars weren’t in my plans, I did want to do one dinner in Rome that wasn’t classic Roman/Italian food. Actually, I wanted to do 2 dinners but my other choice (The Fooders Mazzo) ended up being too far outside of central Rome to be practical.

Marzapane, sits on so many “best of Rome” lists, and when I saw that 26 year old Spanish chef Alba Esteve Ruiz worked at La Cellar Can Roca, this choice was too intriguing to ignore.

Marzapane was a healthy 45 minute walk from my apartment and after walking my feet off earlier in the day, I was happy when I finally arrived at the restaurant. Seeing as I’d spent the week dining in old school trattorias, the comfortably modern dining space was a refreshing change. Unfortunately, I was seated at the one awkward table in the restaurant, where the chairs were low and comfy, which isn’t something I’m looking for in a dining situation. Perhaps I could have asked to change, but I noticed that all the other seats were dark, which I knew would make taking photos difficult. My table sat underneath a spot light of sorts, which I see now, after looking at the photos from that night, proved to make the food look a “harsh”.

It was my intention to do one of the 3 tasting menus, but none of them had the mix of dishes that I saw on the menu as wanting. Marzapane asks that everyone at the table participate in the same tasting, which doesn’t maximize the number of dishes you’re able to experience off the menu, so instead we chose a la carte.

The service throughout the night was a bit awkward, which isn’t something I’d normally mention, because I have a high tolerance for service styles as long as people aren’t rude. So although the servers were not rude, there also wasn’t the engagement that I normally appreciate when I’m being served wonderful food in a nice environment. I found it odd that the plates of food were delivered to the table without a word of explanation.  There was also the matter of the wine we ordered not being available and then being brought out a “similar” wine which was not similar at all and €20 more expensive than the one we originally chose.

I’m not going to blame it on the servers’ English not being strong,  because I am usually fantastic at getting by in situations where I don’t speak the language. I did find it interesting though that in a restaurant where the staff were all so young and the clientele seemed more than half English speaking, that there would be this difficulty in communicating.

I chose from the menu the dishes which contained ingredient combinations which intrigued me. Perhaps because of that, there were some hits and misses in the dishes as a whole.

My meal at Marzapane challenged me. There was so much potential for it to be an amazing meal, but it seemed to fall short in so many ways. I really wanted to like the meal, and there were parts that were great, but unfortunately the whole was not greater than the sum of (some of) the parts.

Learning the tricks of the trade and deciphering the magic of Hollywood #yourebaconmecrazy
Meal after meal, I continue to be surprised and delighted @origenoaxaca. Broccoli rabe salad with smoked trout, “tasajo” beef aguachile, and mole verde marrow with octopus. Gracias @chefrodocas for spoiling me!
Dreaming of there
Craving a simply soul satisfying memela from Dona Vale this morning
Oaxaca 💕
My best nights look like this