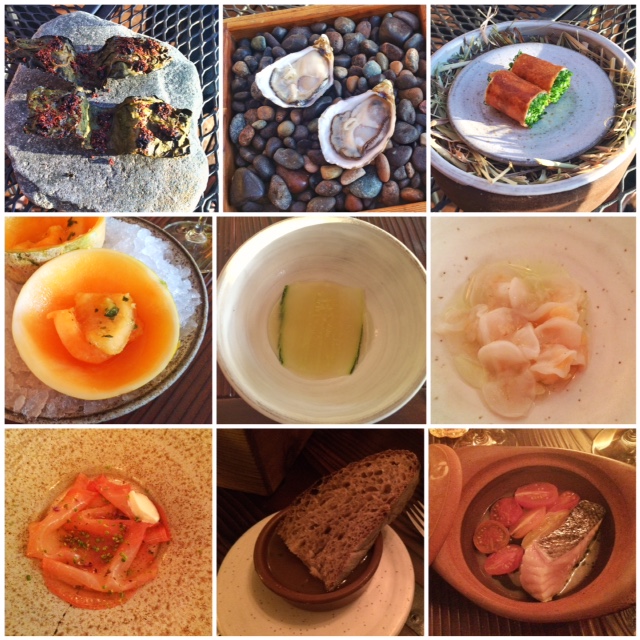 I never gave Lummi Island much thought before I saw that it was one of the 10 restaurants that the New York Times listed as “worth a plane ride for” in 2011. Sure, I’d seen Lummi Island on sign posts on drives between Vancouver and Seattle, and I knew that it was an inside joke with my (other) family because at one time they owned a piece of land there. But other than that, Lummi Island was just something I knew of, rather than a place I desired to go. But then the New York Times published that article I took note to “expect a menu with an obsessive focus on local ingredients” at the Willows Inn. This was enough to make me curious, and curiosity satiated often leads to great adventures!

My initial research on the Willows Inn uncovered that Washington native, Chef Blaine Wetzel’s pedigree included a few years at noma in Copenhagen.  This was enough to pique my curiosity, so  I continued to follow Chef Wetzel’s progress and over the past few years he’s been awarded Food & Wine’s Best New Chef 2012, the James Beard award for Rising Chef (’14) and Best Chef Northwest (’15), all this and he isn’t even 30 years old! With each accolade, my desire to make a trip to Lummi Island to dine at the Willows Inn grew exponentially.

There are a few impediments to dining at the Willows Inn. The biggest being that with only 26 seats and 1 service a night, 3-4 nights a week, 9 months a year, it seems impossible to get a reservation. Well that is, unless you stay the night at the Inn. But when you couple a night at the Inn on top of the dinner, it makes for a pricey adventure to a small island that no one’s heard of.

Despite the impediments, I kept Willows Inn high on my list of “the next” restaurant I wanted to visit and I talked about my desire to go whenever I could. I am a very lucky girl because when my in-law’s sold their house and wanted to do something “special”, we knew just the thing! And a couple of months after booking, I found myself on a roadie south on the I-5 towards Lummi Island!

We wanted to have the full Lummi Island experience so we drove around the island to check it out. It took less than 30 minutes to drive the loop, but in that short time, I saw what a special place Lummi Island is. And as a bonus, although it’s so close to home it is removed enough to feel “away”.

We stopped in at the Beach Store Cafe, a cute little spot across from the ferry. 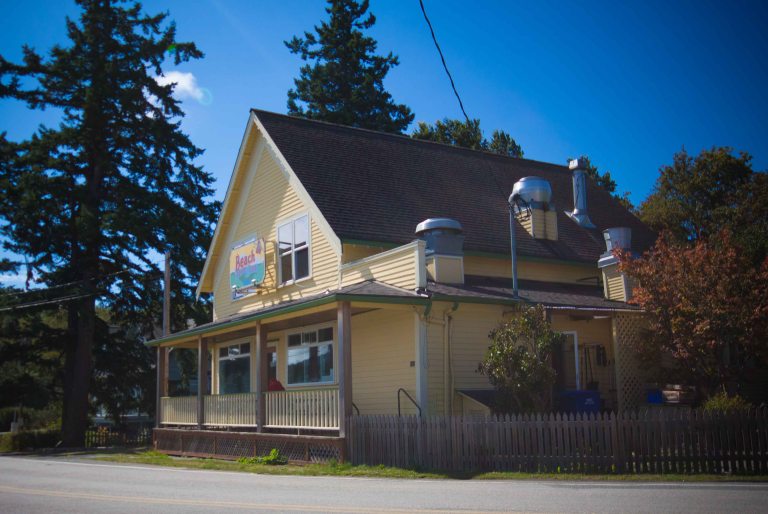 I planned for us to hike the Baker Preserve Trail to the Lummi peak. I thought it would be a great way to work up an appetite for our epic meal. The information I’d read about the hike was that it started steeply at the beginning but leveled out quickly. I’m not sure my idea of level is the same as the writers of the info I’d read, but the group were troopers and we successfully made it to the top and back without incident and were rewarded with an amazing view in between. 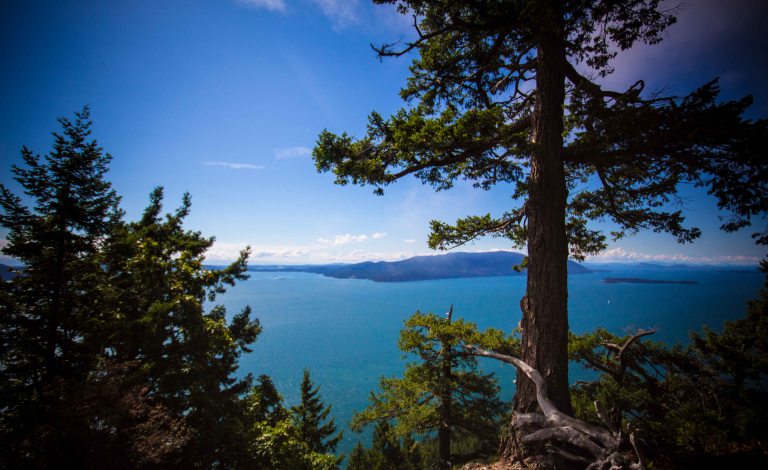 We arrived at the Willows Inn to check-in  into our cabin and I started to get excited about my dinner as I saw the cooks busy in the kitchen prepping for the meal. We settled in at our cabin and had just a little time to rest before we walked the 1/2 mile back towards the Willows Inn.

Dinner at the Willows Inn is served at 6:30, but we arrived early for cocktails. It was such a stunning day, so we enjoyed our first drinks on the patio and I had the opportunity to browse through the beautiful leather bound “reference guide” which shares with the diner information on how the extremely local ingredients are sourced. 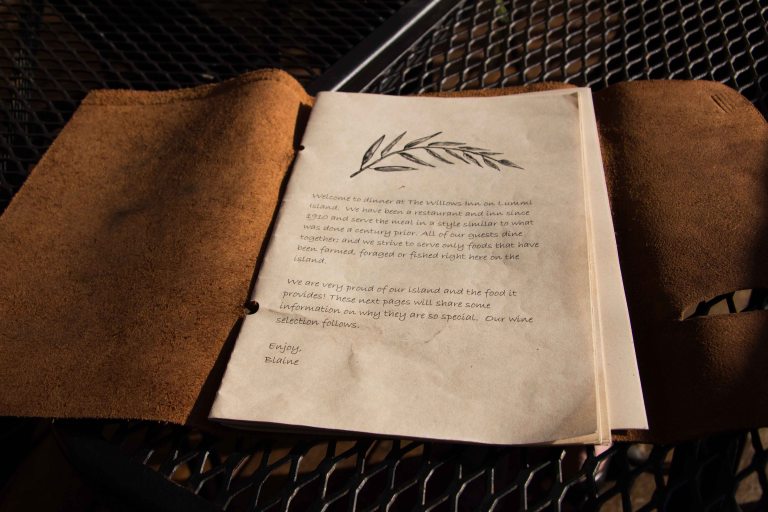 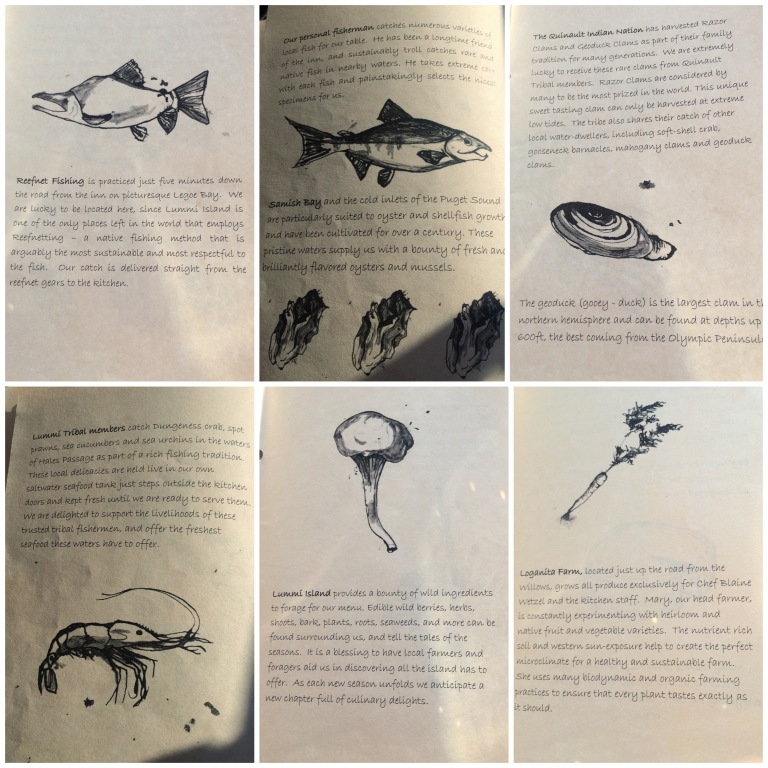 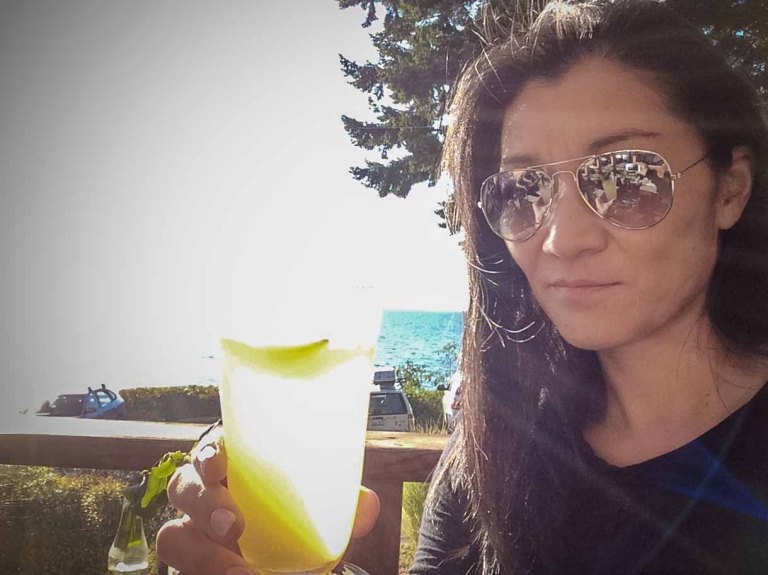 We knew the dinner was going to be a marathon with multiple plates, served over many hours. What we weren’t sure about was how to tackle our beverage choice(s). It’s always difficult to know how to navigate a surprise menu, so while I rarely choose the wine pairing, at the Willows, the pairing option looked like a good option. The bonus was that they allowed us to share 2 tastings amongst the 4 of us.  With all of the choices done, all that was left was to relax into our meal.

The appetizers started flowing out one after another in no particular order. I loved how the chefs from the kitchen were involved in service, which seemed to convey a “casualness” that put me to ease. After my meal at Eleven Madison Park where the service was (almost painfully) structured, I loved the seemingly seamless service that broke down the hierarchy of the who does what through the meal.

I loved that my first bites were thoughtful without flash; spectacular without being a spectacle. I understood that there is great technique involved in making food seem this “simple”, but I appreciated the confidence that it takes for a chef to understand the greatness of nature and how his role is only to coax the best out of each ingredient.

It was in that moment of understanding that Chef Wetzel served us the next course and I gushed with excitement to the Chef, telling him how excited I was to be eating at Willows. I’m sure I sounded like a giddy groupie in that moment, but after so many meals where I’ve felt like an invisible diner, I was excited to have a voice.

At this time, the blinds were dropped on the patio and the diners were led into the dining room and I had a few moments to reflect on the first many bites from the meal. Being from the Pacific Northwest, so many of the flavours that were presented seemed so familiar, but each opened my eyes wider to the amazing bounty of the place I call home. I was ecstatic because finally, I was having a meal that I usually have to travel thousands of miles for, just down the road from where I live. 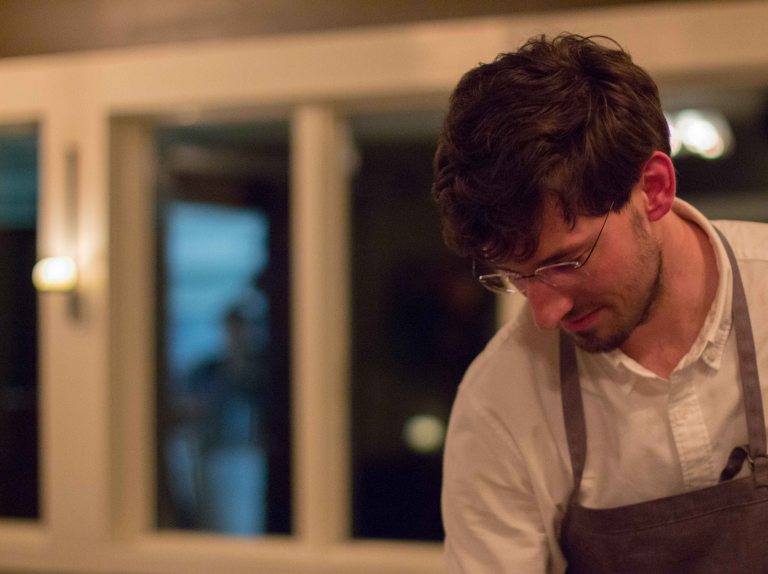 As Chef Wetzel served one of our courses, I asked if he minded if I went and peeked into his kitchen to take photos and if not,  to let me know when a good time might be. He seemed almost taken aback by this request, so I kept talking, telling him how I loved to watch the movement of service and how it seemed like a beautiful dance to me. I explained that he could tell me where to stand in the kitchen so I’d be out of the way and that at any time he could just let me know if I was being a burden. He seemed almost amused and said “no problem, whenever you like”. And of course I took full advantage of this access from that point forward in the meal when I had the chance. 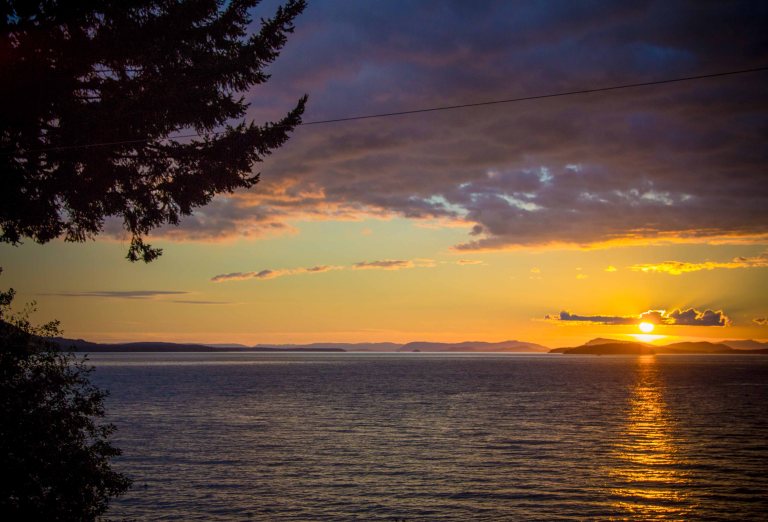 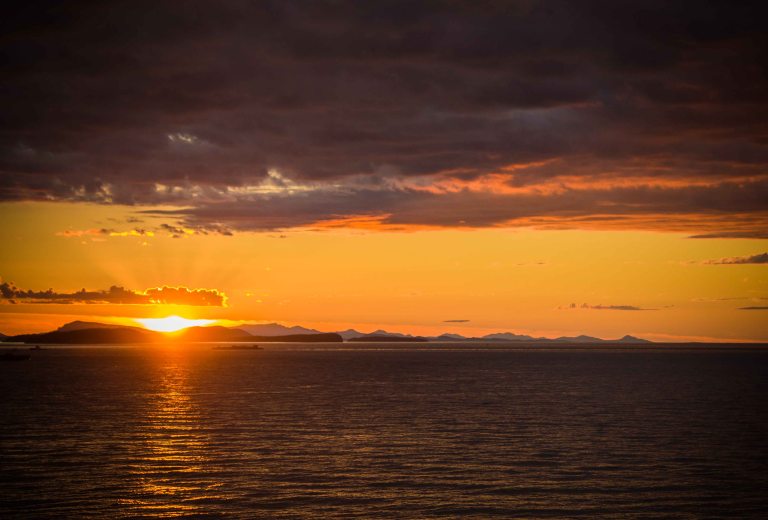 So while the room moved outside to start taking photos of the amazing sunset, I took advantage of looking in on the kitchen. 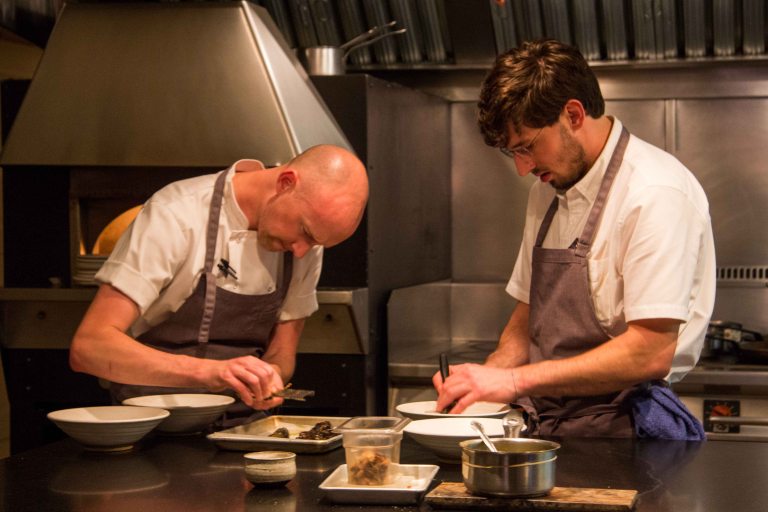 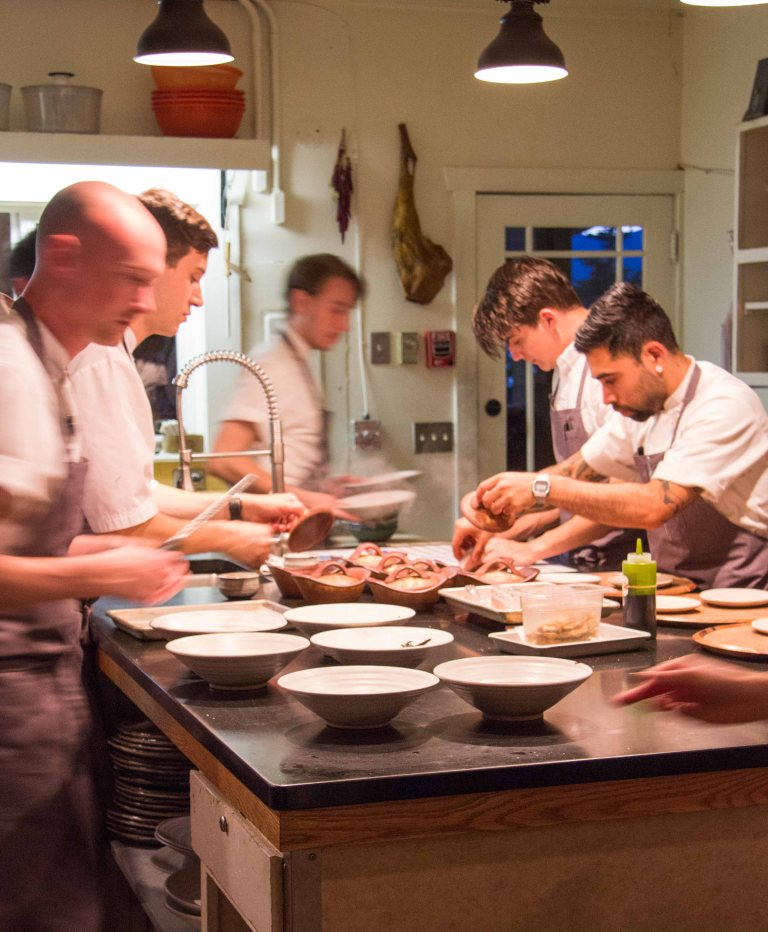 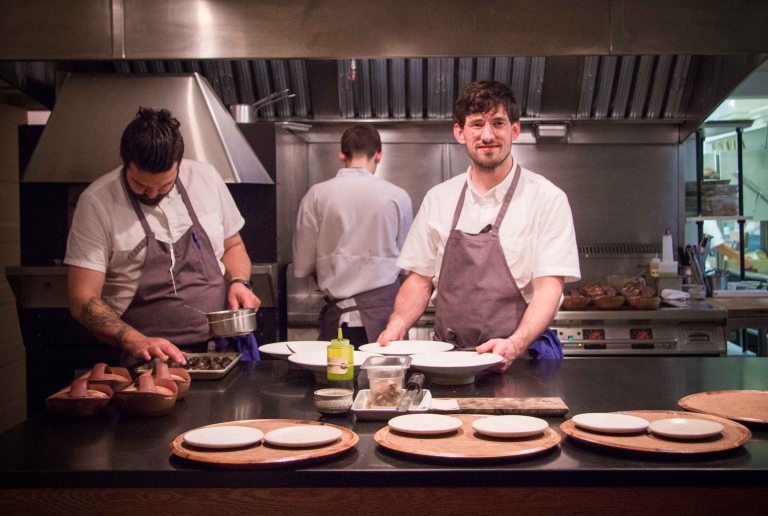 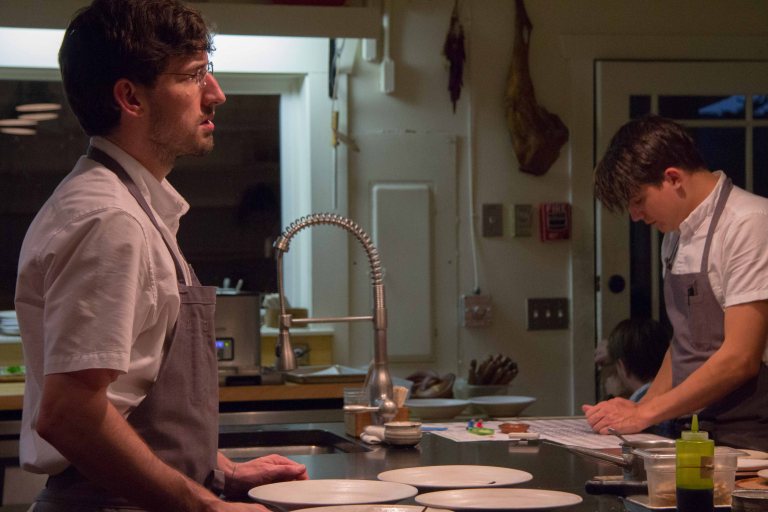 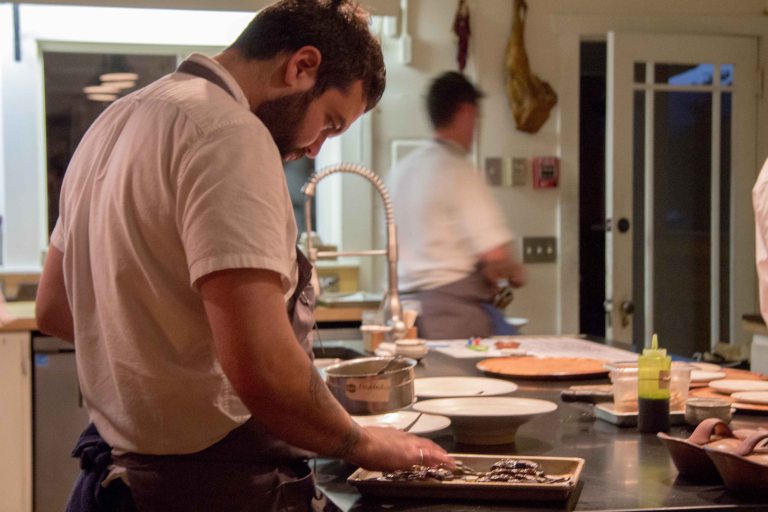 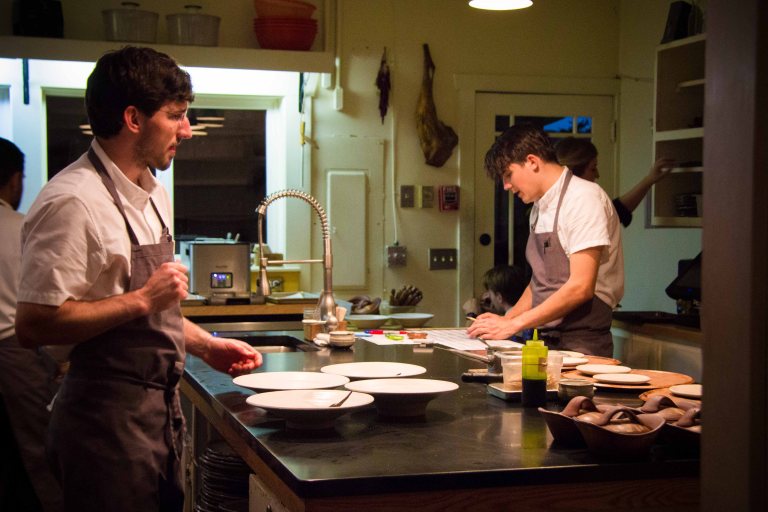 I will admit, the sweet courses were a blur to me. I know I enjoyed them, but sweets are never my thing. Around the time when the sweet courses started coming out, was when the service staff (seemed to) relax completely into the evening and conversations started to flow. I appreciated the genuine friendliness of the staff. Everyone seemed to have a great story and you felt they understood how magical a place the Willows Inn was, and were doing their best to share this with the diners.

After dinner was done, I went into the kitchen to have thank Chef Wetzel for an amazing meal which felt like a love letter to a place I call home. We chatted a bit and before I knew it, the rest of the dining room seemed to be in the kitchen with me. I spoke to Chef Wetzel not only about the amazing abundance of ingredients on Lummi Island but also in the challenges, which the Chef seemed to turn into successes. And when we talked about the camaraderie of the staff living isolated during their on-season and how many of the chefs/cooks go and spend time in other kitchens in their off-season, I started to draw a comparison in my mind to what it might have been like for Ferran Adria and his staff in the early days of El Bulli, located in the remote seaside town of Roses in Spain. Wow, was I comparing my time at Willows to my imagination of El Bulli (because sadly the “closest I’ve been to Ferran was at Tickets in Barcelona)? Yes I was, because my meal and the whole experience of Lummi Island and the Willows Inn was that good.

The Willows Inn serves breakfast, but there was talk if we could really get the value of a $25 breakfast after indulging so much the night before. There was also a fear that there was the potential to be let down after our amazing experience from dinner. I had confidence so I made the big push for breakfast. I’m so happy I did.  Breakfast included a fantastic mix of sweet and savory with delicious coffee and sparkling juices. It was an incredible send-off from what I am quick to describe as the most magical place on earth, the Willows Inn on Lummi Island. 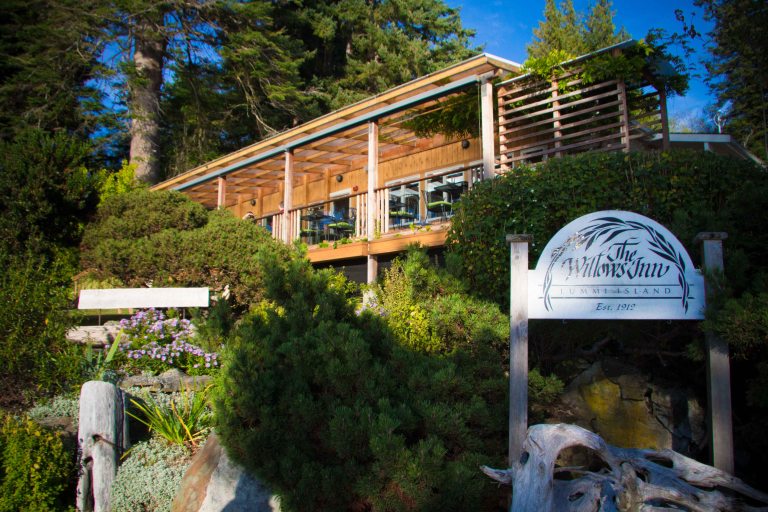