When I booked Barcelona, I already had a reservation to Tickets. And with confirmation in hand, I started immersing myself in Ferran Adria once again. Never did I allow myself to think that Ferran, or even his brother Albert for that matter would be in the building for my meal. 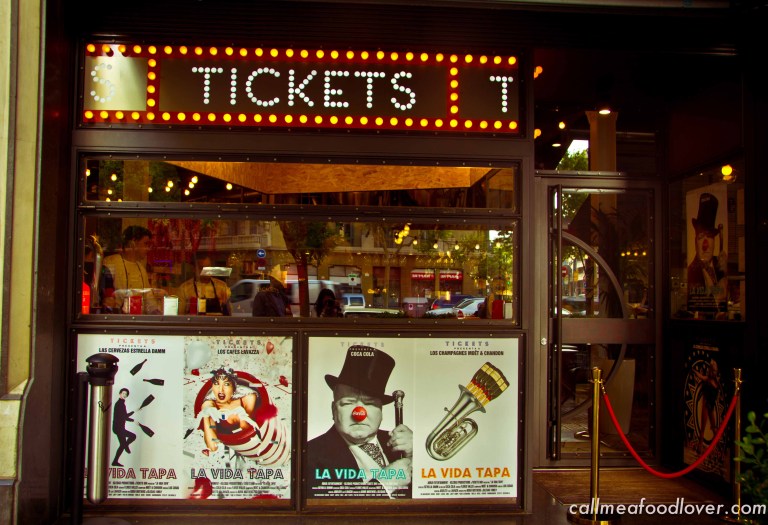 We had the 7pm seating, early by Barcelona standards, but early reservations are better than no reservations at all.  We arrived early and as I waited outside peering through the window I was excited to see Albert inside.  Giddy with excitement, I knew this was going to be an amazing meal.

We took our seats and I had the opportunity to take in the carnival atmosphere of Tickets.  From everything I’d seen on this restaurant, I had a fear that this “carnival theme” was going to come across as garish. Much to my delight, it didn’t seem tacky but filled with fun and whimsy which I knew would carry over to the meal. As we were waiting for our server, I had another Albert Adria sighting.  Happy to see he was in his chef whites, I wanted to scream over to him to “take me on a fantastical ride!” but was somewhat confident that he knew that all the diners felt the same way and that my wish would be his command.

We were presented with menus but decided to let the chef prepare us with what he thought was best.

To drink? For me, cava of course! Ben was craving a beer and was happy to find his Estrella Dam was a refreshing and low carbonated choice.

Seated on a outshoot at the end of the bar, I think I got the best seat in the house as my stool was on the cook’s side and I had a view out towards the restaurant.  We were seated next to the cold fish station which reminded me of a Japanese sushi bar.

Looking at my place setting and picking up the famous Adria designed pincers (las pinzas), I went from knowing something because I’d seen it/read about it to actually becoming a participant in this wonderful experience.

Enough excitement about the experience… let’s get to the food.

My first taste of Adrià was eye-openingly refreshing and put a smile on my face that wouldn’t leave the rest of the evening.

This isn’t the first time I’ve had these spherical olives, so I knew what to expect.  I’ve actually had them a few times at José Andrés’ restaurants The Bazaar and Jaleo. While I enjoyed the olives in the past, I felt that I’d “been there, done that” with these. I’m happy to report that these olives were very different and better in my opinion.  It made me question why though, I know that Andrés is using the same technique, so perhaps the starting ingredients in Spain are that much better?

You know that face drooling face Homer Simpson makes when he thinks about donuts?  I had that same look after eating these succulent pieces of toro.

The air bags were made of the lightest and crispiest cracker and were filled with a lightly foamy cheese and topped with a sliver of manchego and hazelnut oil pearls.

Unfortunately I have no better description for the above as my attention was pulled elsewhere.  From my best seat in the house, I noticed that Ferran Adrià had entered the building.

Ummmmm, are you kidding me?  Yes, I joked that maybe there’d be a sighting, but from all that I read, this was Albert’s baby so I didn’t think Ferran would be around.  My heart began racing and I couldn’t think.  He was showing some people around the restaurant and was in and out in a flash.  I slowly recovered from my excitement to concentrate on the meal again.

This dish had all the goodness of the best California roll without the bulky rice to get in the way.

The first oyster had pearls made of sherry vinegar and the second was marinated in a yuzu ponzu sauce topped with salmon roe.  The texture of the pearls on both oysters were surprisingly similar and side by side made me appreciate the spherification method even more.

But alas, I was pulled away from my food as Ferran entered the room again.  This time to take a seat with his group 2 tables over.  Ben said I blushed when I saw him, which I found hard to believe.  I’ve met many “famous people” in my life and never blushed, but then I don’t think I’ve ever experienced my heart beating so quickly before either.  This is the man who is dubbed “the best chef in the world”, “the most influential chef of the century”, “the man who changed the way we eat”.  He was sitting 2 tables over from me and about to enjoy the same dinner I was having!  So of course I had to get a photo:

I was having trouble with the pincers until Ben explained to me that I was to use them like chopsticks.  After that lightbulb moment, I thought that these were the most ingenious food utensil ever.

Savoury foods should not be so decadent and such decadently delicious dishes should not be served so far into service.  Nonetheless, I was mmmm-ing and ahhhh-ing all the way to the bottom of this egg.

One of Anthony Bourdain’s favourites when he was at Tickets on an episode of No Reservations, I thought this would be great as a beach-side snack, but didn’t need it in the progression of my meal.

Stuffed by this point, I was asked if I wanted a cheese course before dessert.  I just couldn’t say no and was happy when just a small cheese course was presented in front of us.

Completely stuffed from 19 courses, I felt like I had gone through the journey of an El Bulli styled meal, (albeit a much more casual one).  I felt like I understood some of the boundaries that were being pushed in terms of making the act of eating a meal a full experience for the senses.  I appreciated the techniques being used to transform ordinary ingredients into luxury tastes and textures.  I have had this new age type food before, (at Jaleo/Bazzar and WD-50) but in those meals there have always been some misses amongst the stars.  I was expecting that my meal at Tickets would be the same.  I’m happy to say that there wasn’t one miss in this meal.  I was also happily surprised at the cost of this meal, which I think was very reasonable considering the quantity and quality of food I consumed.  All in all an amazing experience, so good in fact that I think it’s going to be hard for my dinner at 41° to top it. 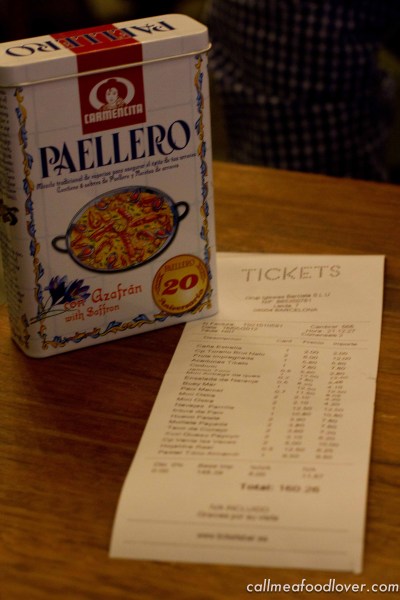