I’ve never a done a good post on dining/drinking on my hometown Vancouver. I have no great reason why not, but many reasons why I should. Seeing as I’ve been a bit lax this year in posting my eating adventures, I thought I’d do this post to (hopefully) get the ball rolling again.

Vancouver is an amazing city to live in. The natural beauty, being surrounded by mountains and water, cannot be beat. As much as I have swooned in amazement in my travels to other places, I am always happy to return to come home.

The food? Well, Vancouver not only boasts an abundance of local ingredients that the home cook and chef, alike have access to, but is also a culturally diverse city which is reflected in the varied cuisines accessible throughout the city. People know Vancouver for its incredible Chinese cuisine and seafood, but over the years it’s become so much more than that.

Restaurants, cocktail bars, and breweries are popping up all over town, so many that I’ve been making a concerted effort to go to new places rather than stick to my usuals. More often than not, I’m rewarded with with a great experience, making it harder and harder to pick a “best of” list for people coming into town.

*I don’t carry around my camera when I’m at home, so all the photos are taken with my iPhone, some are from previous visits to restaurants, and where noted, I’ve used photos a few photos that Alex’s dad Brad shared with me.*

It’s known that Vancouver has  various Asian cuisines represented, and I love that now, the next generation of restaurants opening are often modern takes on the traditional.  It’s no wonder that when I go away for longer than a week, what I become homesick for the most are the Asian flavours that I have at home on almost a daily basis.

Alex arrived on a Saturday afternoon and our first stop was at Ahn and Chi. This restaurant in its former state, Pho Hoa, was one of my staples when I moved into the neighbourhood 10 years ago. The kids of the original owners re-opened the restaurant last year, revamping the menu but still sticking true to the original flavours of their family. It’s now a hip, happening place with great food and cocktails and knew that it would be perfect to start off Alex’s Vancouver food experience.

Surprisingly, there was no line up at Ahn and Chi and we were quickly seated. We ordered all my favourites from the menu, which of course was way too much. But Alex is a lot like her dad Brad when it comes to wanting to try everything, (which is probably why we get along so well).  We quickly devoured the chili fish sauce wings and spring rolls and then worked our way into some of Ahn & Chi’s “bucket list” items.

With a sufficient amount of food in our stomach, our next stop was a short beer crawl in the ‘hood.

Alex’s parents came into town from Saint Petersburg, Florida that evening and wanted to be included in on the fun. Since Brad and Sue were getting in late, we thought we’d head to Vij’s and to wait out a seat. We knew we’d have a long time hanging in the bar, but between the little bites of cassava fries and pakoras and our non-stop chatter, we had no problem with the wait.

Sunday mornings are for going slow and easy and enjoying the view. Lucky for us, my in-law’s just happen to have one of the best views in Vancouver. We decided the best way to start the day would be with breakfast in, supplemented by a few flaky treats from Sweet Victory. 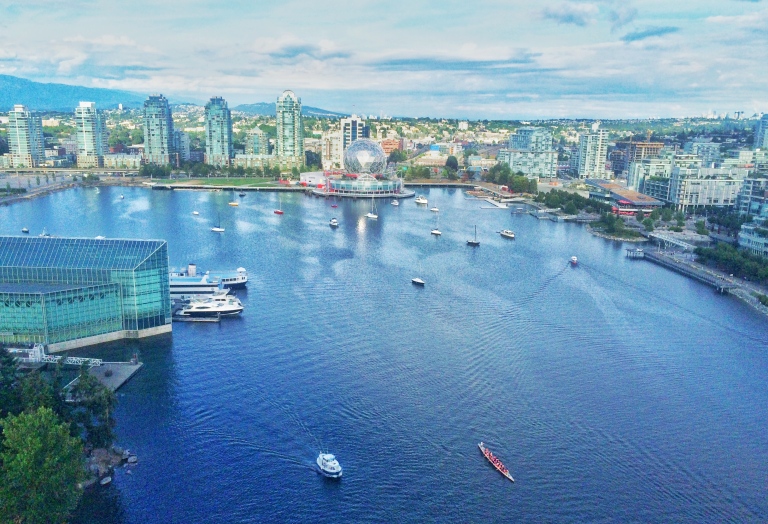 After our huge breakfast, a walk on the seawall was in order. But of course we had a destination in mind, Granville Island!

I had already picked up provisions for our Tofino trip, but with this gang in tow (Brad), I knew that more would be purchased “just to try”. Luckily my pal Ray at Seafood City was around to help us out with their great selection of smoked salmon candy and a couple dozen oysters for us to crack open later in the evening. Visiting markets is one of my favourite things to do when I go away, and while I normally can’t buy up the store in my travels, I don’t mind the “window shopping”. I’m fortunate though that Granville Island is my market and I not only get to look, but get to buy as well. 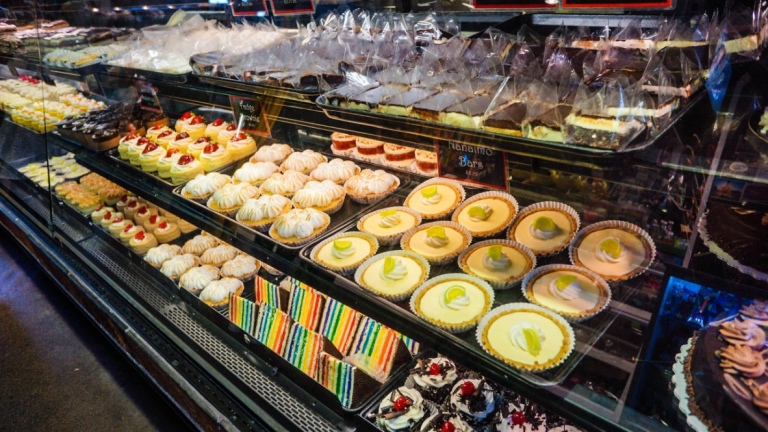 With this crew, we’re always eating and drinking, so it wasn’t a stretch for us to get together before dinner to have some raw oysters, which was paired with a mezcal tasting of wonderful curios picked up in Oaxaca over the years.

Dinner was at Chambar, a place that I always have a good meal,  but doesn’t hit “the list” for people coming into town. The food/drinks are always wonderful and as an added bonus on this evening is that it’s right next door to the arena where we were going to catch the Drake concert after dinner.

The gang moved on the next morning for a week away in Tofino, but on the way back, there was time with Alex to start back at exploring Vancouver again.

We were exhausted coming back from the island, so we decided to stop for quick and easy Chinese on our way home. It’s interesting how some of my Vancouver favourites have now been found by the media masses. 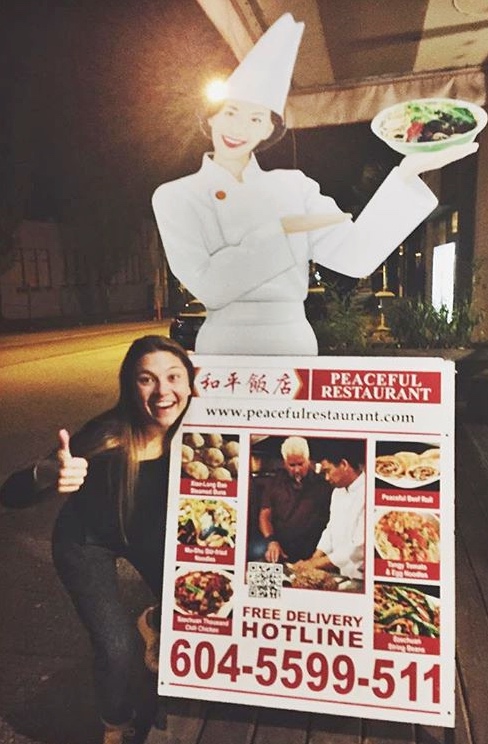 But regardless of the hype, you can always count on a tasty meal at Peaceful. Of course the Peaceful roll and dan dan hand pulled noodles are a must.

The next day, Alex had ramen on the brain, so I left her to pick one from my top 3.  Marutama with its thin hand-made noodles and rich chicken broth, Taishoken for tsukemen or Hokkaido Ramen Santouka with its more traditional rich pork bone broth.

Hanging out in Gastown with some time to kill before dinner, I was thinking Pouthouse or the Alibi room for a drink, but neither was open before 5pm so we went into Chill Winston for some Happy Hour drinks.

As soon as we started planning the Rappa-Wendkos family reunion, the first request for dinner by Henry was the back table at Bao Bei. It’s a great space and they do a family table in the back which gets you a extensive sampling of the menu.  Even more fun when everyone’s ready to have a great time.

And the Keefer bar next door is a must stop either before or after Bao Bei.

The next day, we wanted to start things off right with a good coffee at Revolver. 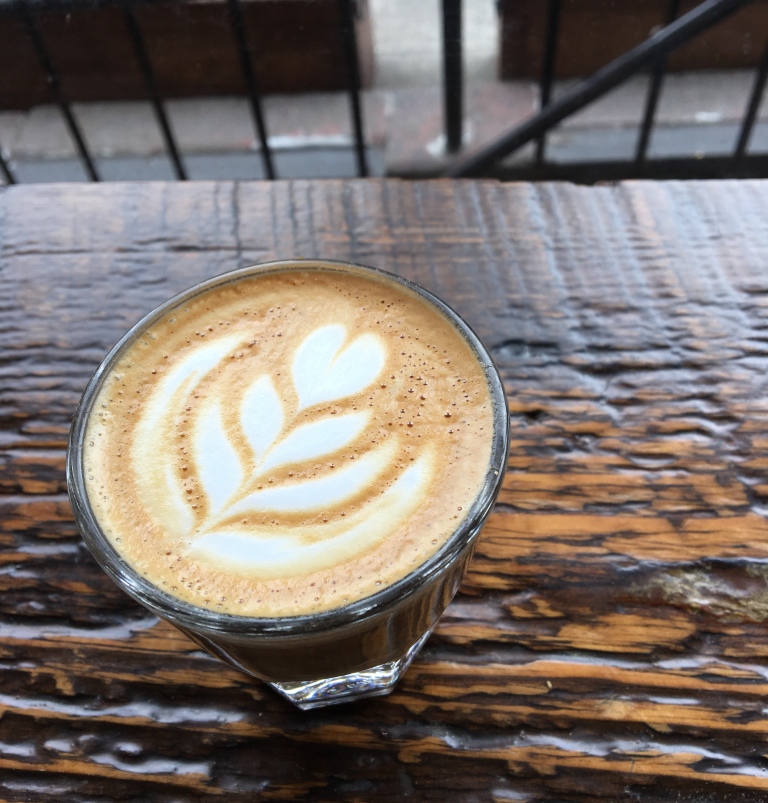 And after a walk down at the beach we sat on one of the best patios in the City.

Sitting in the sun, Alex and I were lamenting her impending departure the next day. While it felt like we’d done a lot, it still felt like her time was too short. We talked about what she hadn’t yet done that she wanted to do in her visit and she’d mentioned “Whistler”.  I threw it out there that if she stayed I’d take her up the next day, and before I knew it, bam, she’d changed her flight!

Alex’s Vancouver food list was filled with Asian delights and we were doing a great job crossing them off the list. We’d already done the modern takes of Vietnamese and Chinese and funny enough, Maenam’s Thai restaurant was one of the first restaurants in Vancouver to introduce us to a more innovative approach to traditional recipes. Maenam is definitely a place to go with a few people so you can order and sample more from their always delicious menu.

The next morning we woke up early, grabbed a coffee from Matchstick and zoomed up to Whistler. We wandered around the village and then hit the Scandinave spa for an afternoon of relaxing in the shadows of the mountains.

After we were thoroughly relaxed we made a stop at the Sea to Sky gondola in Squamish so Alex could have one last look at the view before I returned her home. 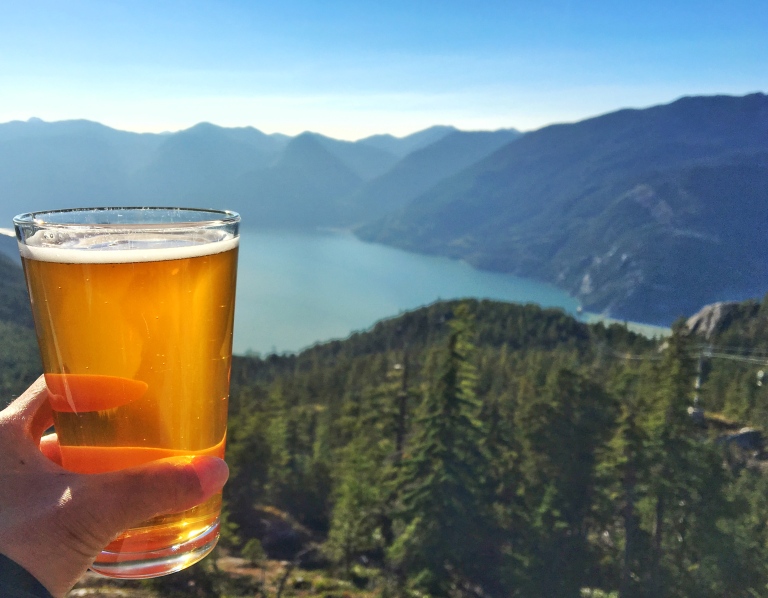 One last dinner, and because I hadn’t anticipated Alex still being around, I hadn’t planned anything. We were a bit done with Asian, and I wanted to stick close to home so we decided to try to get into Osteria Savio Volpe without a reservation.

Since opening a year ago, Savio Volpe has been one of the toughest tables in town. Nestled in the triangle of Kingsway and Fraser, this restaurant looks good and serves rustic Italian fare. Without a reso though, I knew we’d have to wait a while, but luckily, Crowbar has opened across the street and I knew it would be the perfect place to kill some time as we waited for our table.

We waited over an hour and a half for our table, but I knew that it would be a wait going into it, so I didn’t mind. While it wasn’t the best meal I’ve ever had there, it was still a great time.